yidneth in Natural Medicine • 2 months ago 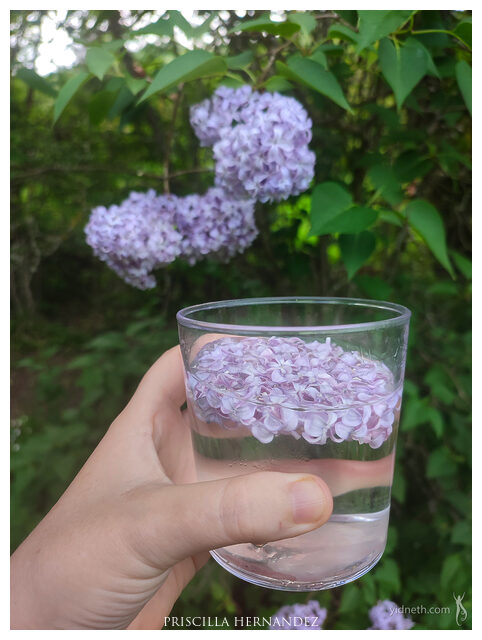 Lilacs bloom from April to June, depending on the weather, but they remain in full bloom barely a week or two, so I was extremely lucky to stumble upon a shrub in full bloom and prepare delicious lilac water. What a feast it is to celebrate Spring. The name "lilac" come Arabic (līlak) meaning blueish and provides the name of a colour that could be described as a light or medium shade of violet or purple.
Lilacs include around 20 species of the genus Syringa and many varieties of them. The flowers are usually of a light violet with a tinge of blue, but can be also white, dark purple or pink. They are famed for the characteristic smell. In fact, it belongs to the same family (Oleaceae) than Jasmine. They're native from South Eastern Europe.

How to prepare Lilac Water: A beverage for the fairies

It really needs no recipe. It is as simply as dropping a bough of fresh blooms into a pitch of water and let it infuse overnight (or at least a few hours). It's best to harvest them in the morning when they're tender. Take away dead blossoms and green parts and use the rest. The only challenge is to find a flowering bush as Lilacs blooming is rather ephemeral, it only lasts for a few weeks and can happen from April to June depending on the weather. These I found, exactly mid-May. So if you're lucky (as I was) to find it, and the chance is fleeting, it really requires no further instructions. After infusing the water will have a distinct tinge of floral taste that reminds of the intoxicating fragrance of lilacs. It can be actually reused a few times before the blooms go waste. It is super refreshing and addictive with a slightly sweet tinge to it. It tastes like Spring, in fact it's like a beverage for fairies and it looks so pretty too. I like it served very cold.

And besides refreshing it is aesthetically pleasing and also motivates you to drink more water and keep you hydrated (for those of you who need a little motivation to drink eight cups a day, this makes it less dull)

You can alternatively make lilac syrup using sugar in addition to the water, boiling and draining. It can be store for a week and can be used on different recipes.

Another easy option is to prepare lilac sugar, adding blossoms to a sugar jar and letting it dry, then you will have your flower-scented sugar to sweeten your desserts or beverages. Similarly you can infuse honey.

Overall the smell is very relaxing and used in aromatherapy but there is a lot more to it than the beauty and scents of these flowers. Lilac smell amazingly good and are in fact edible. In fact the whole plant is edible and is free of poison or toxin from bloom to roots both for humans and animals. You will find them often as decoration on cakes. Leaves are also used for tea and herbal blends. The flavor of the leaves is a little is a bit bitter, that's why it's usually the blooms the ones used.
Best way to use it for medicinal purposes is to make an alcohol-based tincture.
I also like to make infused honey (not only it tastes delicious) I can preserve it to add it to my herbal teas afterwards.

Chewing the bark can also help in the case of having a toothache or oral infection.

The essential oil can be used on skin as it has plenty of astringents and antioxidants to prevent aging or even to heal wounds.
It's also found in Asian traditional medicine being used to prevent lung ailments, cough and colds.

Mythology behind the name 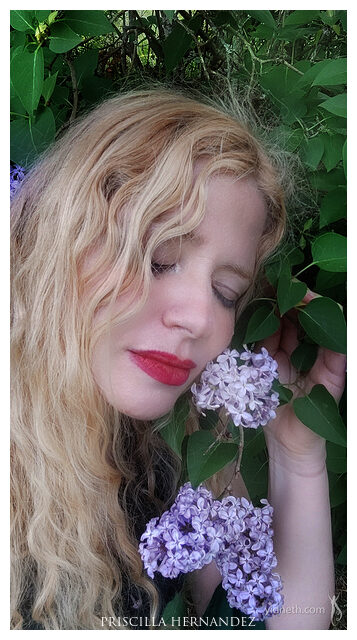 The species of Lilacs belong to the genus Syringa There are about a dozen species, their colors ranging from the very colour it provides name to (white purple) to pink and white. The scientific nomenclature was provided by Linneo in 1700. The name syringa comes from syrinx a forest nymph in Greek Mythology.
Pan, the hooved Greek god of the forest, wilderness, shepherds and flocks and famed and famed for him being prone to seduce, felt infatuated by a forest nymph "Syrinx" and she, that was known for her chastity was afraid of his advances, run away and disguised herself cane water reeds which were used by Pan to build the first pan flute, am aerophone folk musical instrument using reeds of different lengths, which was called syrinx
Because lilacs also have hollow stems Linneo chose the name *Syringa" derived from this legend. Excerpt from the Flemish magazine "Regenboog". Draft for the woodcut "Pan" of Jozef Cantré. Published in 1918. 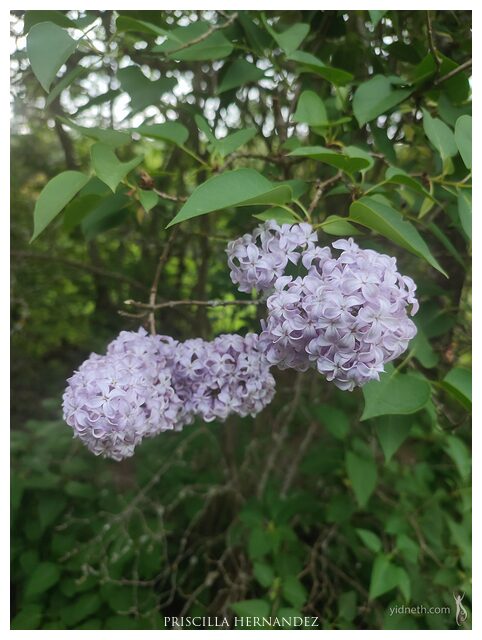 The Celts considered it magic because of its fragrance.
In some countries it's still tradition to give a bouquet of lilacs to your first love so they remember you (and the smell of the flowers).

This remembrances is also the reason why Lilac is also a color of mourning, being a symbol of remembrance it is used by widows to remember their lost love after lifting the traditional black clothing.

In Victorian era a bouquet of lilacs could be considered a reminder of an old love.

It is also the "official" flower chose to celebrates a couple 8th anniversary.
In many places it's common lore to say that you should never bring lilacs inside a house. In some of them it was considered an invite to the fairy folk to kidnap you from your home. In others it's more related with an omen of death because it's not only that they wither pretty easily (you need to keep the stems long and they won't last long anyway, their beautiful aroma will soon tell too pungent as they rot away, and thus it was usually linked to superstition as they were used to conceal the smell of the dead but they would soon become waste themselves too.

In Russia a bough of lilac blooms will bestow the gift of wisdom to a newborn baby.

Lilac flowers have four petals, if you find a lilac with five petals it will bring you luck (in a similar way to the superstition of four leaf clovers)

Have you ever tried lilac water? Did you enjoy the post? Let me know in the comments!
thank you!

Lilacs have been a very special flower in my life. They grew everywhere in spring and as kids we would pick them and take them to the teacher. This was back in the day haha.
After all these years I never knew that they were edible in any way. I just thought they were the pretty smelling flowers that came in spring. I see them now in a different light. I'm going to pick some and make lilac water. I'm excited.Thanks for the great post.

I'm also glad that they were present in such beautiful memories, it's curious about how we link smells to memories. :) Next time you find a bough of fresh lilacs give it a try. Blessings

Thanks. I know where to find them but I have to wait until dark haha. 😃

Oooh I just imagined you sneaking in some neighbours yard lol 🤣. Let me know if you like it. You can add a spoon of sugar too

Let me know if you like it 🎵 and you can make syrup and infuse honey. I was lucky to find them in perfect bloom

I love lilacs and have the traditional light purple and a white one. Right now my whole yard smells of lilac, with small notes of lily of the valley. I used these 2 for my wedding bouquet in 1987. Loved all the facts about lilacs. :))

Aww how lovely, and I'm glad you found it interesting :) Yes the scent is really something, so intoxicating and lovely. You're lucky to have shrubs, have they bloomed yet? give it a try :)

Yes, they are just starting to go by as there's wicked heat coming this weekend.

I made lilac jelly a few years back:

Ooooh I would love to try,sadly my time is gone til next year, they all withere already

Oh no, ours were roasted too, as I say it is super ephemeral

I have never tried Lilac water but I thoroughly enjoyed reading your post about how to make it and all the other information about lilacs.

Well lilacs are rare to find in fresh bloom so it makes it quite a luxurious delicacy but similarly can be done with rose petals, still the taste, though floral, is not the same of course

Well I've seen people doing fruit infused water and I've merrily eaten rose petals and rosehips (didn't really like either all that much, but my godfather showed they could be eaten so I tried too) so it makes sense that you can make flower infused water too XD

Didn't know about their other properties but I have a lot to learn about plants.

Thank you for sharing this amazing post on HIVE!

Join the official DIYHub community on HIVE and show us more of your amazing work and feel free to connect with us and other DIYers via our discord server: https://discord.gg/mY5uCfQ !

If you want to support our goal to motivate other DIY/art/music/homesteading/... creators just delegate to us and earn 100% of your curation rewards!

Dear @yidneth, we need your help!

The Hivebuzz proposal already got important support from the community. However, it lost its funding a few days ago and only needs a few more HP to get funded again.

May we ask you to support it so our team can continue its work this year?
You can do it on Peakd, ecency, Hive.blog or using HiveSigner.
https://peakd.com/me/proposals/199

Your support would be really helpful and you could make a difference.
Thank you!