slobberchops in Urban Exploration • 3 months ago

“What is that place?”, I said to @anidiotexplores as we slowly meandered down a busy carriageway doubtlessly pissing off the large convoy of cars behind us.

I didn’t make a note of where, just that it was in Liverpool somewhere. This is not surprising as the 'City of the Beatles' is crammed with rotting monoliths, most of which are tough to crack.

We had been heading to ‘The Margeret Beaven School’, an old sprawling complex that I had already registered one fail on.

“Beaven" was going to have to wait. This bad-looking "Turret House" needed to be investigated first. "Turret House" was situated on one of those non-stopping dual-carriageways and unless you could get through these front gates then parking was going to be an issue.

Abandoning it close to a residential block we walked toward the gates and literally jumped a 5ft wall, without thinking about what was on the other side.

I landed relatively well in a grassy patch, a little damp but this was March. What do you expect?

Thinking of myself as extremely dexterous on that day and now out of sight (of Karens), I followed @anidiotexplores toward this wreck of a building. 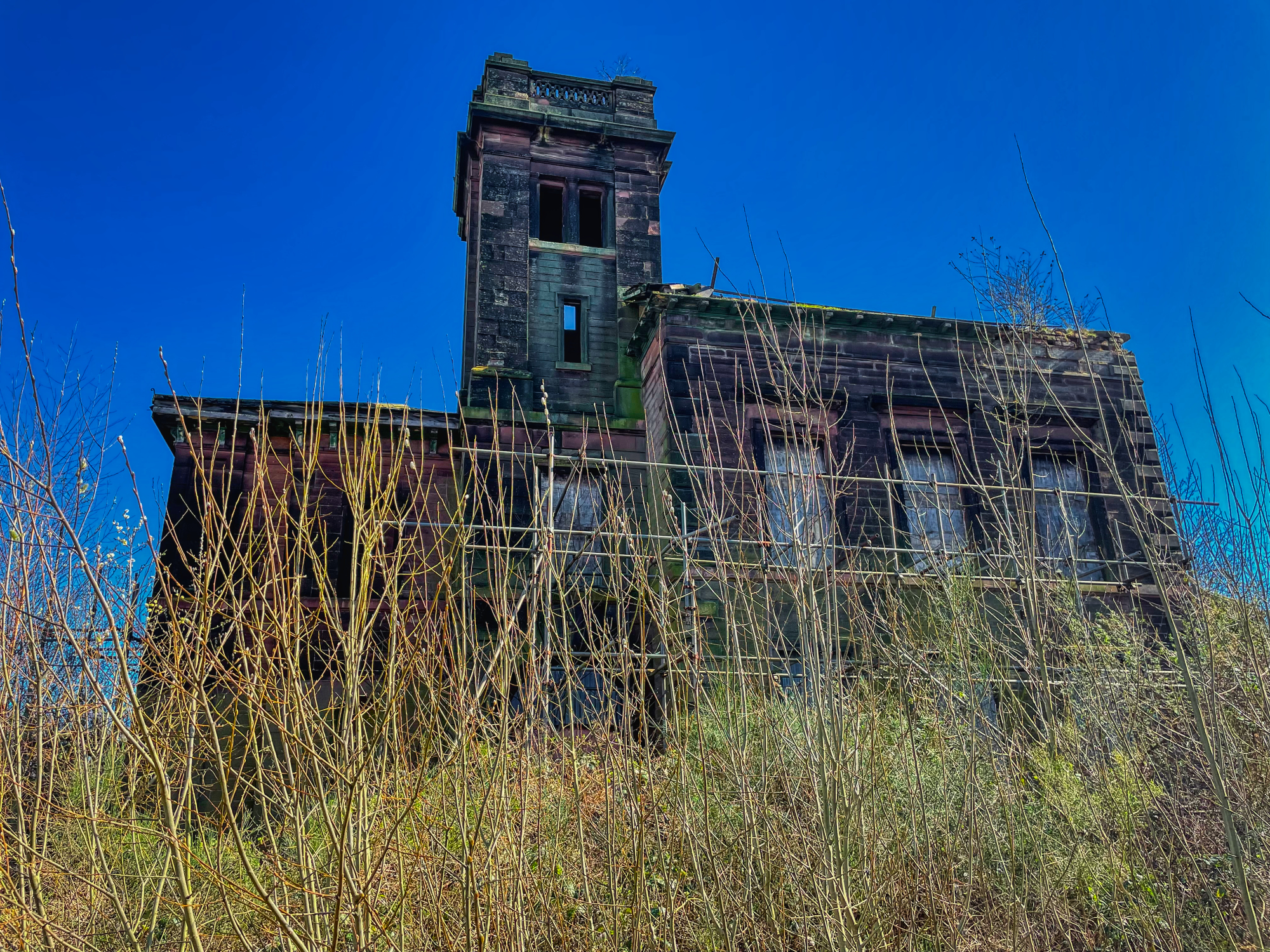 Getting a clear shot was not easy. I was not crouching when taking this shot, the grass and weeds were of giant proportions even in Spring.

Come Summer, and this would not be approachable. There had been some work in progress… once. The scaffolding looked old and as abandoned as what it was trying to keep together. 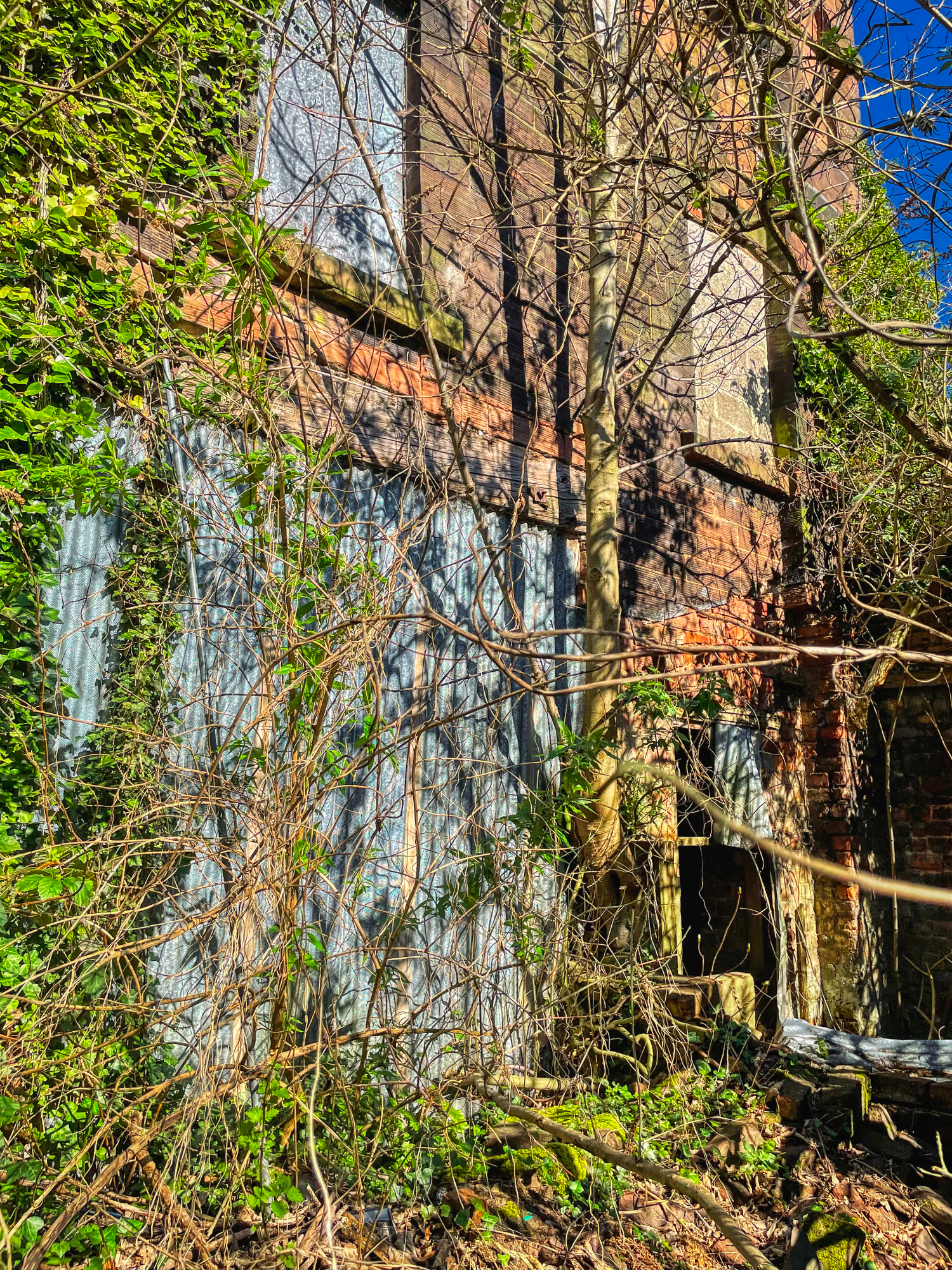 Some attempts had been made with rotting corrugated iron to keep us out, but a breach was found quickly. Inside was tough walking. “Turret House” was literally falling apart and more akin to a building site without the bulldozers.

'sexual knowledge of the ancients' 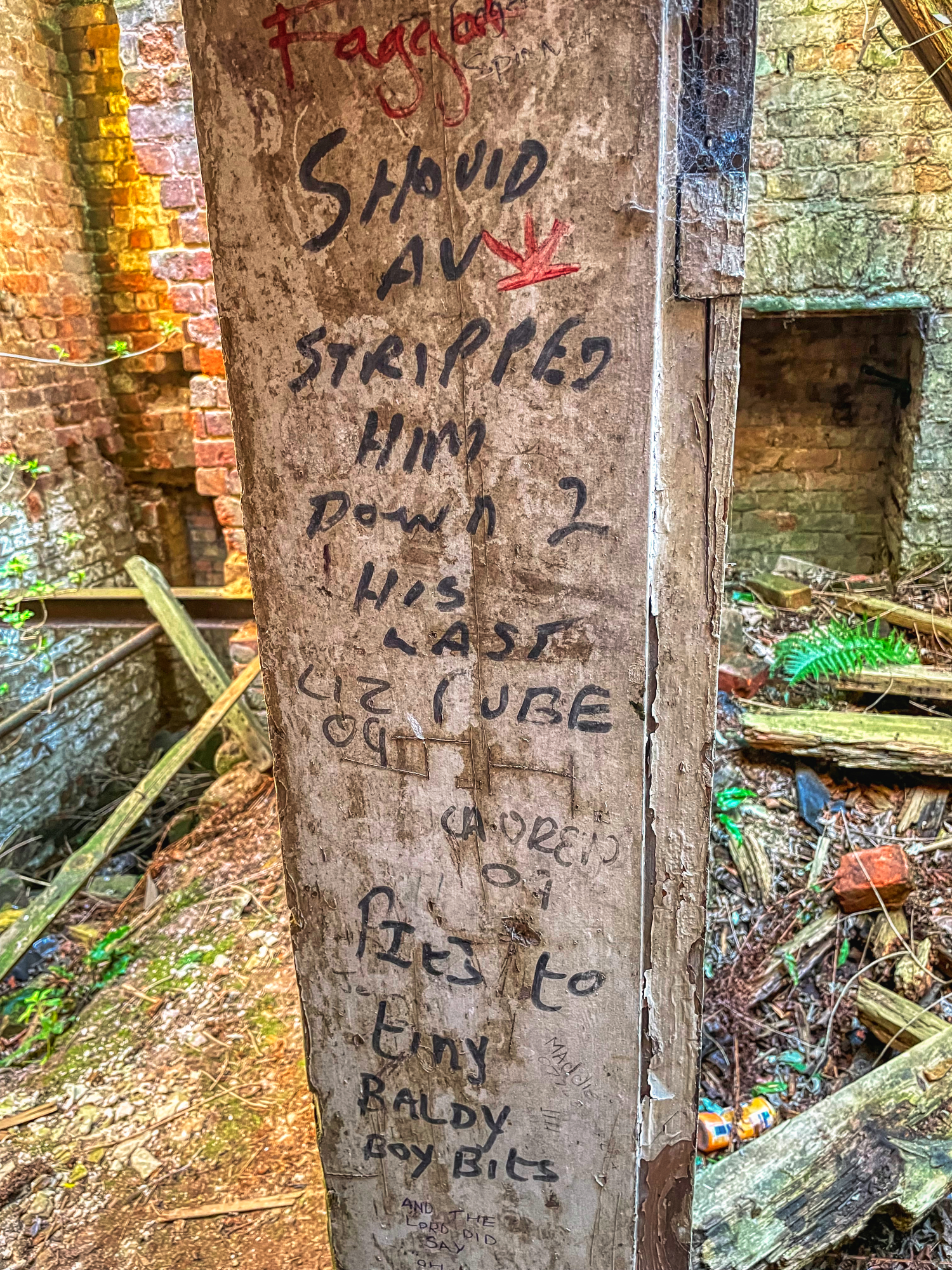 Shaking with excitement I read… and learned. At a guess, that's not a natural archway designed to attract the eye. Scaffolding had been meticulously placed here, as well as in many other areas. 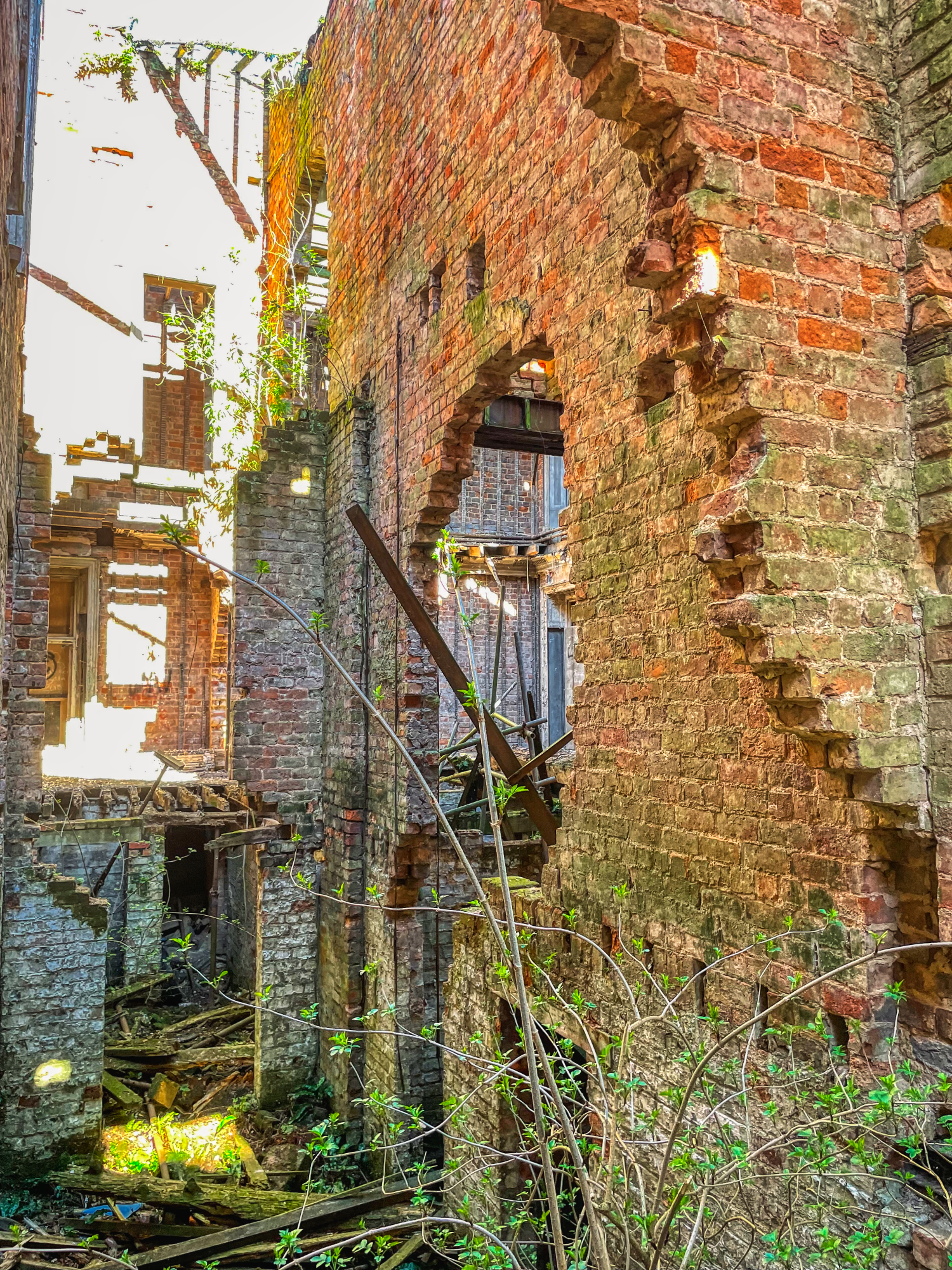 We descended trying not to twist any ankles; the floor was not exactly up to current health and safety standards. Gazing upwards I marvelled at the intricate work and carvings on the partially fallen beams. One wrong step and they might have been landing on my head. 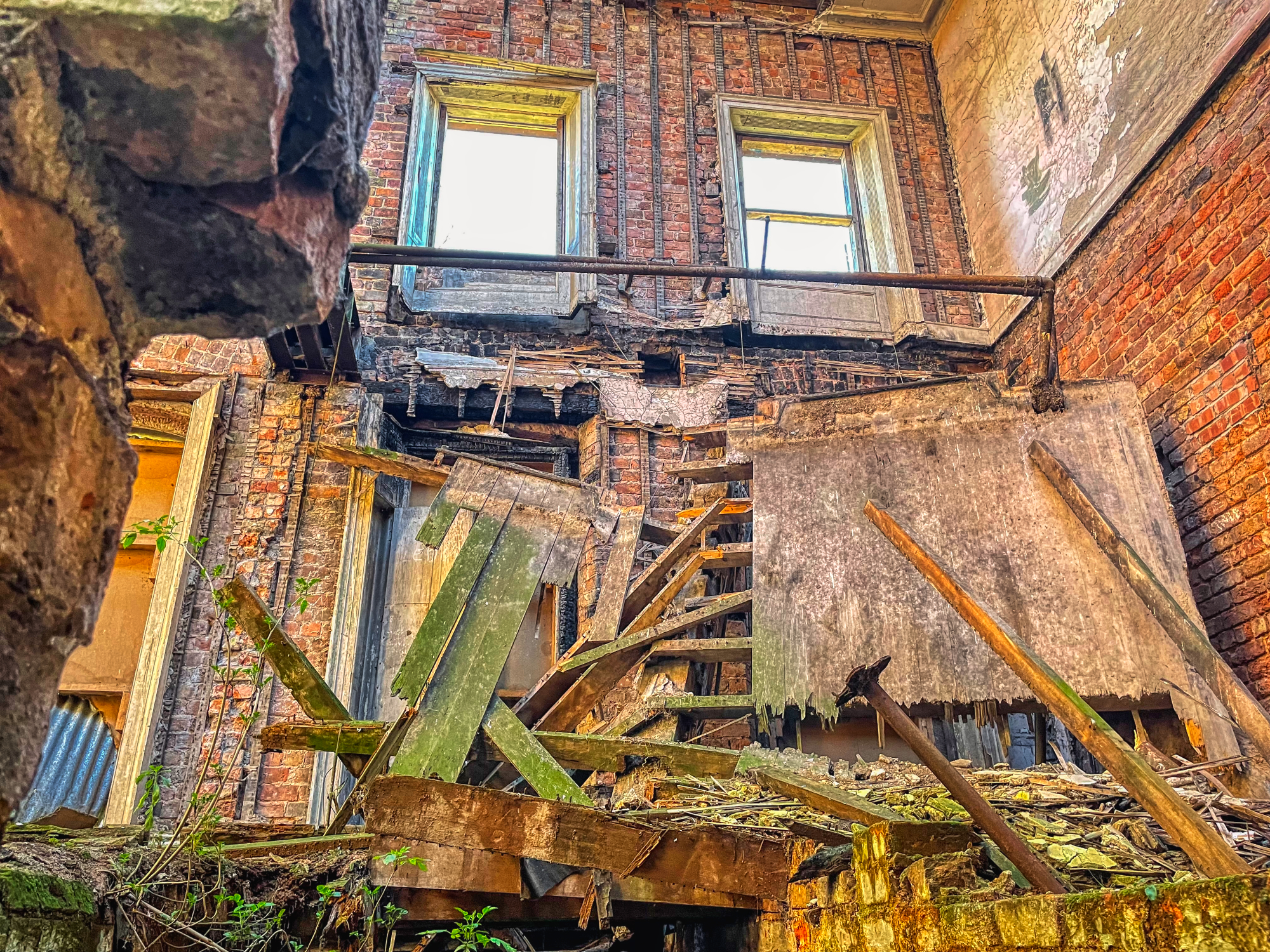 Now that looked like a place where I needed to go, some old scaffolding was creating a makeshift slippery ladder. I did think about crawling through there. You never know what treasures lurk beyond. 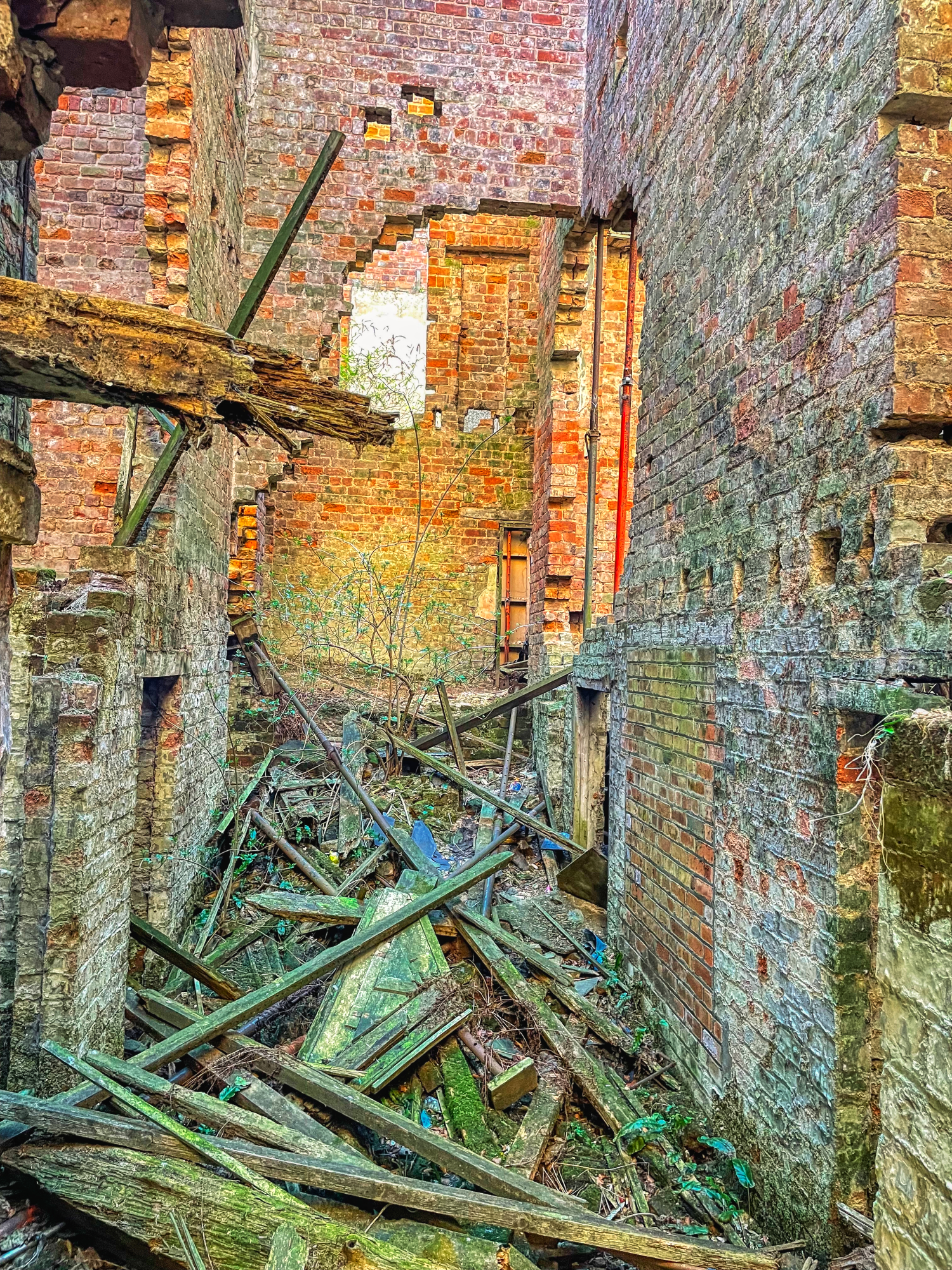 The far end is where we entered. Maybe we should have stopped there and turned back? However, I had climbed up the dodgy scaffolding by this point and could barely move in case the second floor collapsed. 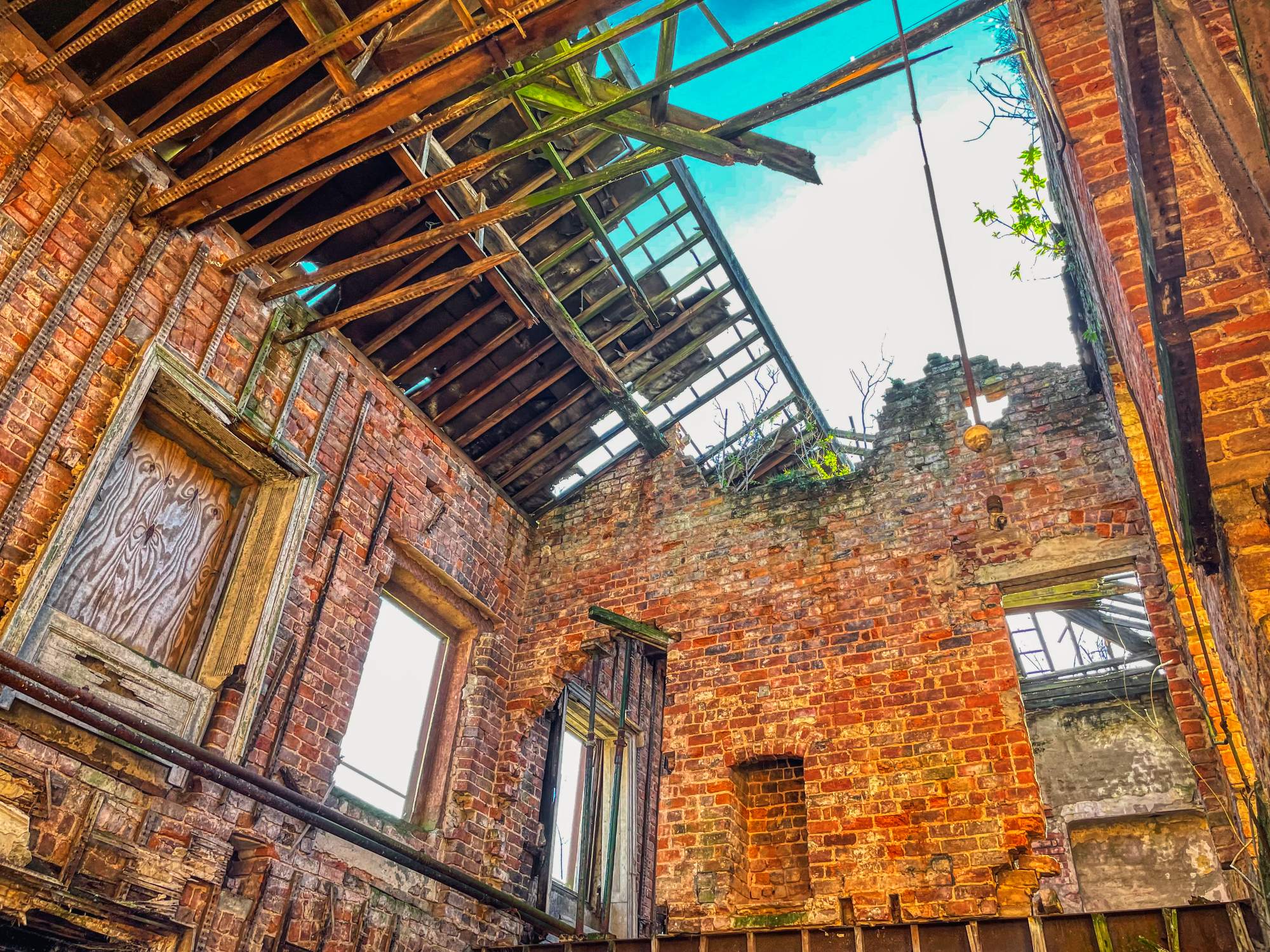 The light fitting is all about what is left, beside crumbling rubble. '@anidiotexplores takes a break and excitedly shares this extraordinary find via a 'live feed'. We fully expected the TourBus to arrive as we were leaving'...

I spotted another possible exit while perched on this ‘second floor’, and noticed there was at least one other person as crazy as me who had made it here. 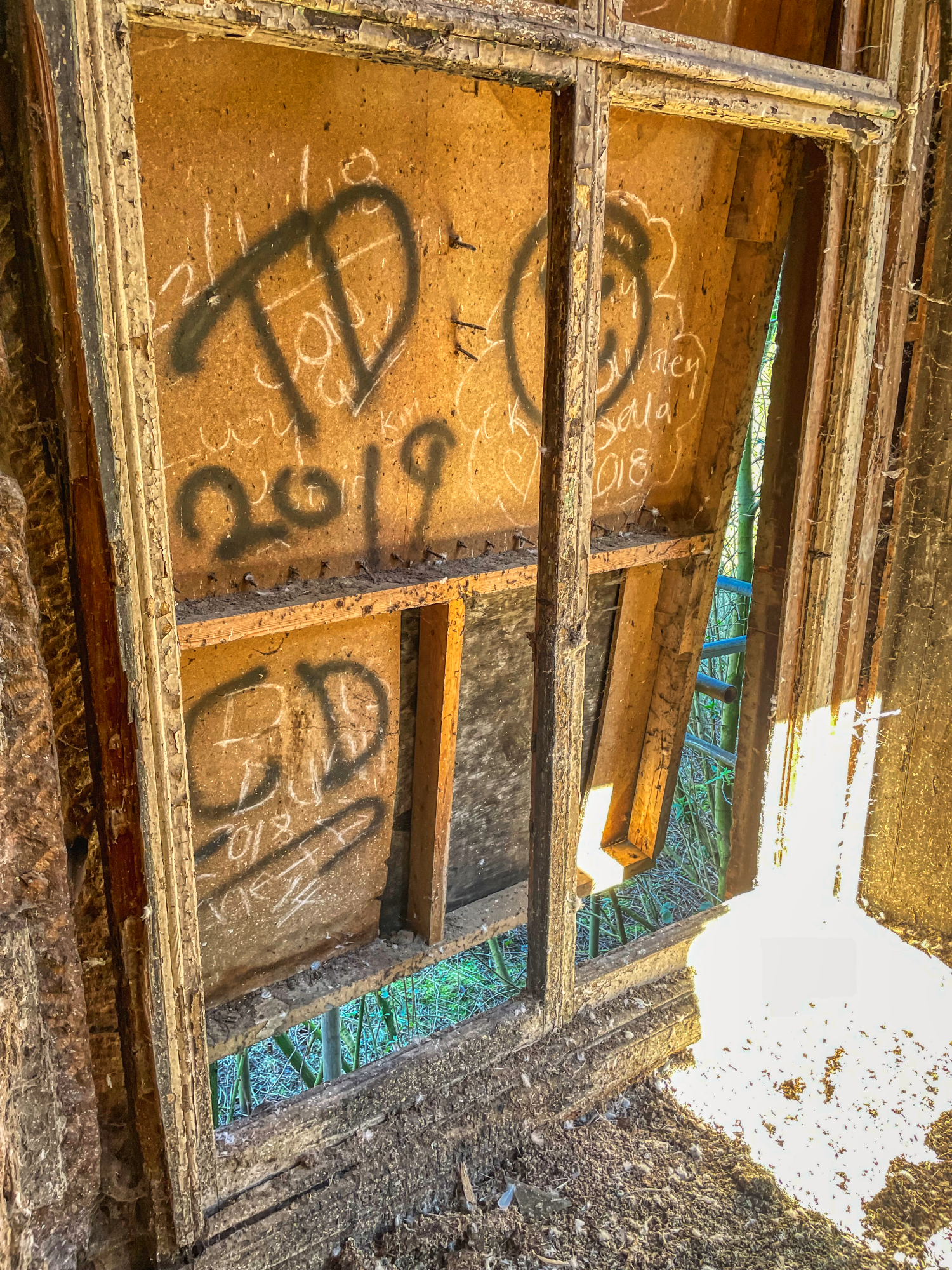 The shutter rattled as I pushed it and slammed back into position. Sharp nails edged it. Not an easy exit. Edging back down using the scaffolding, I made it safely without breaking anything.

As we were leaving I spotted yet another ancient sexual tome of wisdom. This one was more verbose than the last and filled my head with new and deep-filled knowledge. 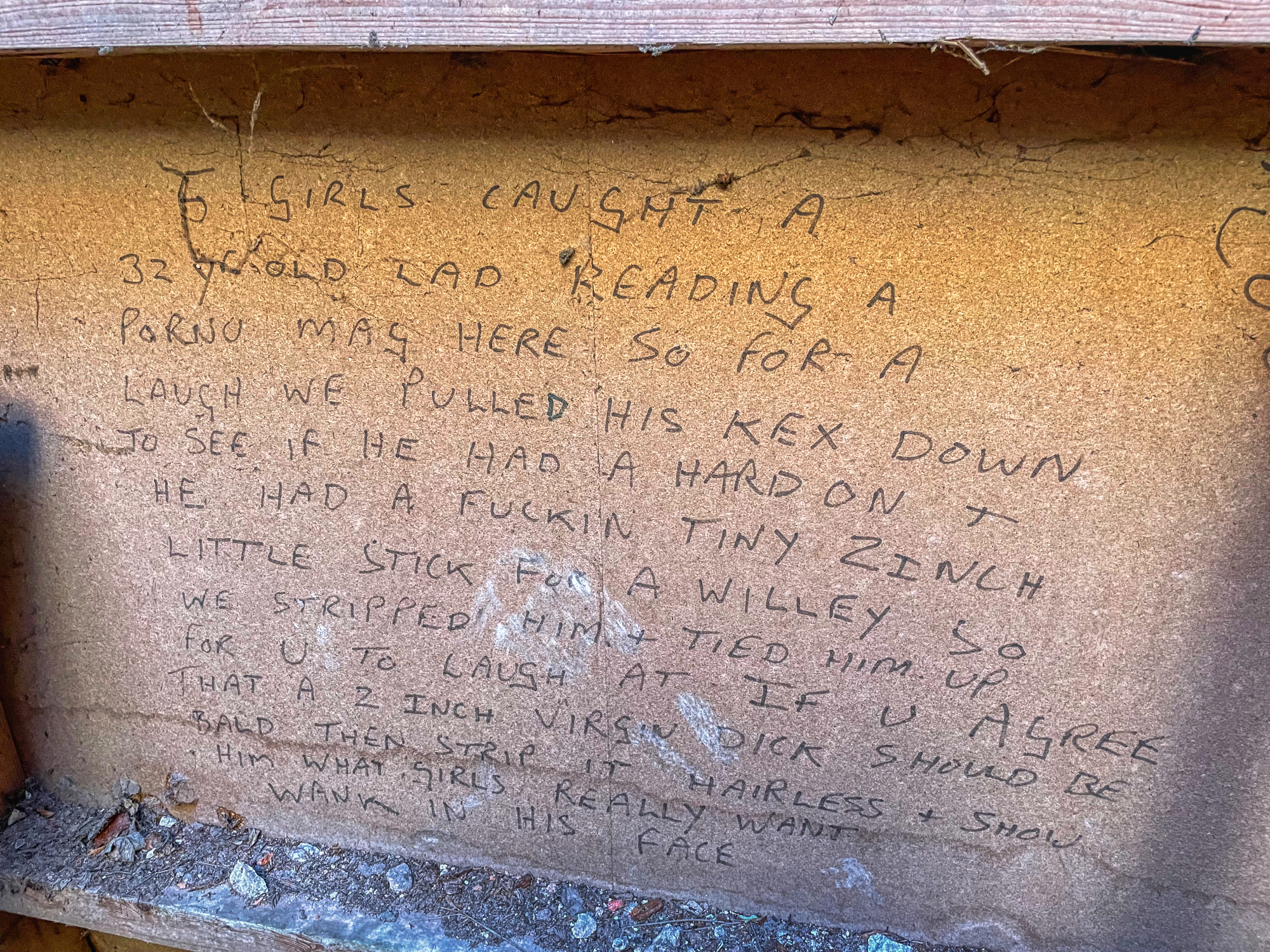 We headed back to the wall in a daze, me jumping over it and forgetting about the concrete far-side. “Owww, that fucking hurt”, I spluttered landing heavily, pain lancing through my shoe bottoms. Reality returned in an instant and the knowledge gained flooded from my mind in seconds.

Do you like posting your Urbex content and photography for FREE on Facebook and YouTube? I like to get some form of reward for my work and every time I create I do just that. Take a look at The Urbex Community on HIVE.

If you want to keep creating for FREE then ignore what you are reading. If you want to be like me and gain something other than BUGGER ALL for your work then click here and learn about posting on the HIVE blockchain.

If you found this article so invigorating that you are now a positively googly-eyed, drooling lunatic with dripping saliva or even if you liked it just a bit, then please upvote, comment, rehive, engage me or all of these things.

Submit
0.00 CCC
535 votes
Reply 37
Sort:
[-]
poshtoken  3 months ago
The rewards earned on this comment will go directly to the people( @slobberchops ) sharing the post on Twitter as long as they are registered with @poshtoken. Sign up at https://hiveposh.com.
100%
-100%

This looks like a T-Rex made out of bricks!

I must have to make of them in my life just now with both kids being obsessed with them. As soon as the pic came, I was like, dinosaur!!

Call it a second sight!

I think it is just off Queens Drive, I could be wrong but it looks familiar.

Now don't be giving it away, you know what happens.. tut.

Leaping 5 foot walls in a single bound is impressive. Landing hard is another matter.
If I tried that I'd have two broken legs! I'm getting a bit fragile in my dotage 😂😂👍🏼

I feel I am getting better at this climbing marlarky, as I age.., very strange!

wooooooow that looks scary, but i want to be there at the same time, strange feelings

I am used to these places, this was far from scary. Are you a truly new HIVE person?

I didn't have hp to answer you, sorry for that, yes im new im working on my profile and commenting post's i feel very welcome in the community so im very happy!

I'm not sure 'beautiful' is the correct word.

Urban exploring really just shows how temporary even the most beautiful things are in this realm we live in.

I don't know what this was, perhaps an old mansion. The turret part is different. No chance of getting in that part now.

You sure do find your education in the most darnedest of places, never too old to learn they said!

Yes, learning all the time. So much shit to read in these derps!

Obviously showing their prowess in ability to write, perhaps schooled there, learned little else 🙃

Aww man, I was hoping you were gonna share what you learned with us. Too bad it was ripped from you as soon as you left, sounds like it wasn't a soft landing.

You know there could have been a sleeping security dog in the grounds and you guys didn't even whistle first to check?

The dog would have died of malnutrition some years ago!

Shame that's terrible but true - I look forward to more of your urban adventures, can't believe these places are just left to rot away.

Must have been a lovely building in its day. Looks like it was a bit of a dangerous explore - like anything could have come down at any moment ! And nice weather for march !
!PIZZA

Dangerous it what makes it exciting, too much cotton wool safety these days.

The only proverb that comes to my mind after seeing this, "বাহির থেকে ফিট ফাট ভিতর থেকে সদর ঘাট" which translates to "looking good from the outside, the inside is worse than hideous".

Ouch… hope all well again.
Such an interesting place although it is in pieces and has to be hold up in places.
Thanks for sharing @slobberchops

Hey @slobberchops, here is a little bit of BEER from @joanstewart for you. Enjoy it!

Did you know that you can use BEER at dCity game to **buy dCity NFT cards** to rule the world.

Scaffolding for that? I think it's already a lost cause 😲

@slobberchops! You Are Alive so I just staked 0.1 $ALIVE to your account on behalf of @wrestlingdesires. (10/10)